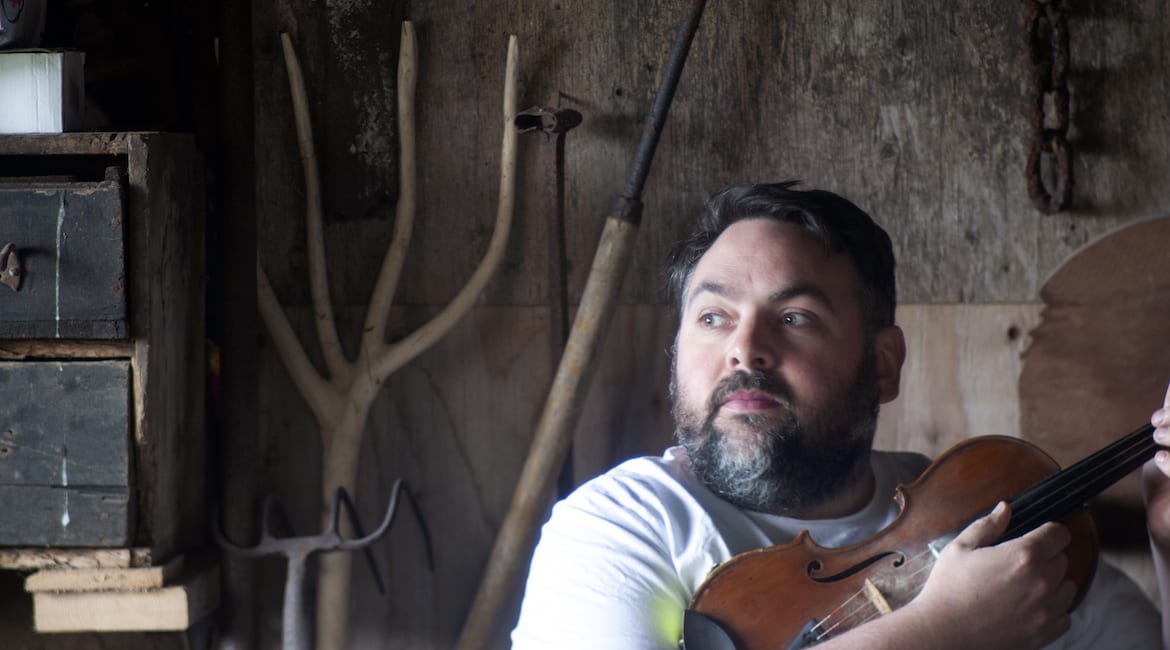 With funding from The Arts Council England, Long division festival was able to finance a series of interesting projects by artists from the Wakefield area.

One such project, titled ‘A Romantic Destination,’ sees Mi Mye songwriter and producer Jamie Lockhart reinventing music from a songbook that was passed down by his family to Skerray in the Highlands for 166 years old, then performs them in a special event in Wakefield with just his voice and a violin.

Jamie took the time to share an overview of the project with us.

A songbook from 1851 used by two brothers; one a folk songwriter, the other the 1st Piper To Queen Victoria. In its pages, the seeds of a musical life that would lead a man from the Scottish Highlands to Buckingham Palace.

Six generations later, and that same book is unearthed in a house in Skerray, on the north coast of Scotland. Passed down from father to son, it now rests in the hands of songwriter Jamie Lockhart.

After 18 years in Scotland, raised with Ceilidh orchestras and choirs, he, like his ancestor, left Scotland to pursue a musical vocation. And now, after 18 years in Wakefield, Jamie will use the music from this 166-year-old piece of history to ask timeless questions. And just using his violin and his stories, he’ll try to answer them.

â€œA Romantic Destinationâ€ is a show about the home, the connecting lines that run through our lives and beyond, and the role music can play in putting it all together.

Jamie Lockhart on A Romantic Destination

In my teenage years, I had violin lessons with one of the greatest violin players in the world (Alasdair Fraser). I loved hearing him talk about getting into the bones of music, finding the ribs and playing among them.

I told him a lot about music, about life and what to do. He told me that I had to leave the comforting environment of the Highlands for a city that would inspire me to have different musical experiences.

So I moved to Wakefield and I love all the music that comes out of it. Since arriving, I have been as involved as this city allows me, which has been great because it has opened its arms to me and allowed me to be a part of it.

Lots of songs that I write for my band Mi Mye are inspired by the storytelling tradition on the north coast of Scotland where I grew up surrounded by great storytellers.

That stuck with me, and continued when I moved to Wakefield, and at shows I like to tell stories, and most of my songs have a strong narrative element.

This year’s Long Division Festival helps people create new works, so I chatted with them to develop the storytelling in more detail.

There will be stories passed down, my own stories, traditional tunes, my own tunes and songs, all intertwined. The show will just be me playing the violin and telling these stories. I’ll be accompanied by Morgan Evans on the piano and it’s happening on wednesday may 30 (tickets and details here). Once I started planning the show some amazing things started to come out of the shadows, long lost stories, tunes I had almost forgotten forever, and an amazing book. This book was right back in my memory as something that existed, it was my great-great-great-great-grandfather’s book that he shared with his brother, who was the Queen’s chief piper Victoria.

The book had been hidden and kept for me. And when I started to read it, I realized that it wasn’t just the two brothers who wrote in it, it had been passed down to them generations before but hadn’t been added for about 160 years. . So for this show, this book became my notebook, just like they used it. I am inspired and sometimes whole arias from their beautiful little melodies. I write songs about family, place and love around these tunes.

This show takes place in a very special place for me, the Royal Wakefield Theater. Years ago when I needed a job the most, they gave me one, looked after me and supported me in any way they could, and most importantly, they gave me a job. introduced my true love Emily. They told me “tomorrow you will meet the most amazing person here” and then the next day she came and worked in the cafe with me.