The title of this book is a lie.

There’s no “philosophy” offered here – no overarching theory or argument about songwriting or singing. There’s not even an explanation of why Bob Dylan chose these particular 66 records as subjects for essays that encompass criticism, history, and fantastical leaps of reasoning.

As for “modern”, well, I guess it depends on your point of view. The most recent recording considered here is that of the oldest composition – “Nelly Was a Lady” by Stephen Foster in 1849, cut by bluesman Alvin Youngblood Hart in 2004. Otherwise there are only two songs from the 21st century inclusive, while nearly half of the picks date from the 1950s, Bobby Zimmerman’s formative years. (It’s also worth noting that only four of his choices are performed by women.)

So, no, there is no K-Pop, emo, chillwave or trap represented in The Philosophy of Modern Song– the most “modern” genre featured is first-wave punk, and Dylan even takes issue with the acts it includes: he writes that Elvis Costello’s writing (“Pump It Up”) includes “Too too many thoughts, way too wordy. Too many ideas that collide with themselves,” and he says of the Clash (“London Calling”) that “a lot of their songs are overdone, overwritten, well-meaning.”

Bob Dylan recording his album bring it all home in January 1965 at Columbia’s Studio A in New York, New York.

Lying, however, is nothing new for the 2016 Nobel Prize in Literature winner. Chronicles: Volume 1 is full of easily disproved fabrications. But remember that accuracy is not necessarily the same as truth.

Most of these chapters, which range from a paragraph to half a dozen pages, are a meditation on a song, an examination of its emotional root or the feeling it evokes. These are usually written in the second person, but the intimate “you” sometimes denotes the singer and sometimes the listener. Dylan’s voice leans towards harsh mid-century jive: “You’re sitting in the shade, slumped, anonymous, incognito, watching it all go by, indifferent, badass – impenetrable” or “You want to be emancipated from all the hukum.

Often this approach is replaced or accompanied by a history lesson. These pieces recall Dylan’s storytelling on his 100 episode “Theme Time Radio Hour” series, the clear precedent for this collection. And these turn out not to be lies at all. Rosemary Clooney’s “Come on-a My House” (which he describes as “the song of the deviant, the paedophile, the mass murderer”) was really written by Pulitzer Prize-winning novelist William Saroyan and his cousin, Ross Bagdasarian, who later invented Alvin and the Chipmunks. Furthermore, we learn that Leigh Brackett, who wrote the screenplay for The big sleepalso scripted the first draft of The Empire Strikes Backand that the image of lemmings “rushing towards their common destiny” is false, invented for a Disney documentary.

Certain songs serve as launching pads for Dylan’s non-musical philosophy. Johnnie Taylor’s “Cheaper to Keep Her” sets up a dismantling of the divorce industry, building a case for the benefits of polygamy. We learn the history of the iconic Western Wear staple, the Nudie Suit, the contrast between George Bush’s Gulf War and George W. Bush’s Iraq War (Edwin Starr’s “war”) , and the invention of the “universal language” Esperanto (“Don’t Let Me Be Misunderstood”). Once in a while, the debates stop for a list – singers who burst into tears, songs based on classical melodies.

Lying, however, is nothing new for the 2016 Nobel Prize in Literature winner.

The most hilarious moments come when Dylan gets caught up in his own resplendent tongue and just can’t stop. “You are the usurper, the actor, the two-faced fraudster – the dovecote, the scandal – the prowler and the rat – the human trafficker and the car thief,” he wrote, riffing on “Everybody’s Crying Mercy by Mose Allison. ” Or when he pushes the implications of a song to the extreme: the shoes of Carl Perkins’ “Blue Suede Shoes” can “predict the future, locate lost objects, treat illnesses, identify the perpetrators of crimes”, while “El Paso” by Marty Robbins” is “a song of genocide, where you are dragged through the nose into a nuclear war”.

The book is a riot of laughter, with some vaudeville-style killer zingers. “No matter how many chairs you have, you only have one ass,” says the greatest songwriter of his generation, elsewhere dryly suggesting “Enjoy your al fresco, infused legacy reduction.” cumin and sprinkled with cayenne. Sometimes it’s better to have a BLT and be done with it. And the secret weapon is the illustrations, filled with old movie posters, vintage commercials and jokes that sometimes require a few glances ( the “Big Boss Man” entry has Marlon Brando as Vito Corleone on one page, opposite an image of Colonel Tom Parker goofing off with Elvis).

But it’s clear that these songs are no joke for Dylan. In a 1997 interview, he said, “I find religiosity and philosophy in music. I can’t find it anywhere else. And it’s the relentless life-or-death stakes and apocalyptic visions, even when obviously played for dark humor, that sometimes make The Philosophy of Modern Song a bit exhausting. Only a few selections (“Come Rain or Come Shine”) offer any sort of relief from the mood of inevitable brutality or impending doom. Perhaps it is better to consume it in small chunks – episodes – rather than all at once.

Ironically, Dylan himself points out this very flaw – the risk of assigning a great artist to a single track and restricting his emotional range. “Johnny Cash loves being the man in black and dresses accordingly,” he wrote, “but the truth is he’s much more of an artist and a complete man. His best records are playful and full of games of words and humor, miles away from the august solemnity of killer ballads, hardscrabble stories and Trent Reznor covers his fans have come to expect.

The Philosophy of Modern Song 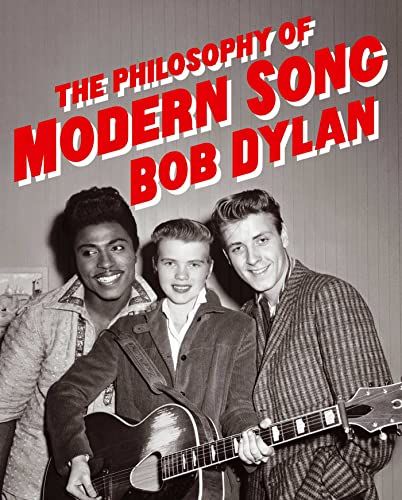 The Philosophy of Modern Song

Yet if you pay enough attention, a larger picture begins to emerge, or at least some tactical advice for songwriters. “Novice writers often hide behind the watermark,” writes Dylan. “In many cases, the artistry is in what is left unsaid.” He warns of “the easy rhyme trap” (as avoided in The Temptations’ “Ball of Confusion”) and explains how Vic Damone’s “On the Street Where You Live” is “all about three-syllable rhyme: street before , front feet, heart of the city, part of the city, bother me, rather be.

At 81, Dylan has spent much of his life analyzing how his personal life informs his songwriting, and here he notes the limitations of autobiographical lyrics. “Sometimes when songwriters write from their own lives, the results can be so specific that others can’t connect to them. Putting melodies in newspapers does not guarantee a heartfelt song. (In a shrewd chess move, he adds, “Knowing a singer’s life story doesn’t particularly help in understanding a song.”)

As with the “Theme Time” shows, when it seems Dylan’s focus is most purely on music is when his own story rings most real. “Being a writer is not something you choose to do,” he says. “It’s something you just do and sometimes people stop and notice.” Digging into Willie Nelson’s “On the Road Again,” Dylan says, “The thing about being on the road is you don’t get bogged down by anything. Not even bad news. You make others happy and you keep your grief to yourself.

One way to think of Bob Dylan’s career is as a lifelong project exploring American music of all kinds. He explains undertakings as curious as his Christmas album or his three volumes of Frank Sinatra material. Having previously worked across folk, rock, blues and country music, this makes his gospel period almost inevitable. The Philosophy of Modern Song brings (almost) everything under one roof, with observations, details and asides to chew on, sudden and blazing insights to be found, again and again.

“Music builds in time as surely as a sculptor or welder works in physical space,” Dylan writes. And after working on this book for a dozen years (he claims) and putting more than five dozen songs under the microscope in one way or another, he concludes that “The more you study music , the less you understand it”. All he can say is that “an inexplicable thing happens when words are put to music. The miracle is in their union… People keep trying to make music a science, but in science one and one will always be two. Music, like all art, including the art of romance, tells us over and over again that one plus one, at best, equals three.

And that right there is no lie.

Author and music journalist Alan Light is the former editor of Vibe and Spin magazines, and hosts the daily music talk show “Feedback” on SiriusXM.