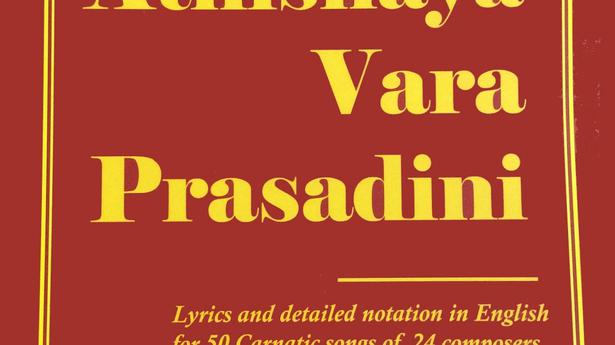 Maragatham Ramaswamy, a long-time musician and teacher, has compiled songs chosen by 24 different composers, noting each one precisely.

Having learned vocal music from a host of veteran musicians such as Musiri Subramania Iyer, Ramnad Krishnan, TM Thyagarajan, KV Narayanaswamy and B. Rajam Iyer, and training one-on-one with Thanjavur S. Kalyanaraman, it is a natural fit for Maragatham Ramaswamy to have a vast repertoire of compositions rendered in the authentic style.

Maragatham, a performing musician who moved to the United States, established the Ragamalika Music School in 1987 and became a sought-after teacher. She received Best Teacher Award at Cleveland Thyagaraja Festival and Sivan Arts Academy, and Sangeetha Acharya Ratnam from Kanchi Kamakoti peetam.

In the book Athishaya Vara Prasadini, published recently by the Ramapriya Arts Foundation, Maragatham Ramaswamy chose 50 compositions by various composers – from Purandaradasa and Trinity to contemporary composers such as Thanjavur Shankara Iyer, ‘Spencer’ R. Venugopal and NS Ramachandran – and presented the lyrics with meticulous notations. The book also includes a pronunciation and notation guide to help users learn the songs transliterated into English. Keeping things simple, she used lowercase and uppercase letters to express short and long vowels, respectively, in Tamil, Telugu and Sanskrit.

The kritis mentioned in this book, although created by well-known composers, are rarely heard on concert platforms. The notations of one of the kritis given in the book.

Use the right symbols


The author’s violin training, under the guidance of many eminent musicians, including Trivandrum V. Harihara Iyer, MS Anantharaman, TN Krishnan and Lalgudi Jayaraman, may have served as the basis for noting gamakas (oscillations) and anuswarams (the previous note slide) using symbols correctly. Swaras for short fillers are also provided with notations in the book. For example, in the Muthuswami Dikshitar composition ‘Chandrasekaram sada bhajeham’ (Margahindolam), the phrase in the first line of the madhyamakala segment ‘Asta siddhi dayakam mukundam’, followed by a set of swaras in avarohanam (descending) highlights the raga lakshana.

The distinctly noted anuswarams in Harikesanallur Muthiah Bhagavatar’s raga Mandari composition, “Athishaya vara prasadini”, after which the book is titled, and in Mysore Vasudevachar’s “Hare paripahimam” in Kedaram provide instrumentalists with a flawless picture of Ni and Ga in these ragas. There is also a sign that suggests dividing the sahitya significantly.

The song and chittaswaram of Pallavi Seshaiyer’s rare composition “Entani vinnavintura” in Urmika’s raga is so skillfully notated that even if one is learning the composition for the first time, one can grasp the intricacies of the raga well.

The selfless work of Maragatham Ramaswamy, with a passion for sharing his knowledge, is reflected in the concise presentation of each of the compositions. The book will be a useful asset for any practitioner and student of Carnatic music. The book (₹750) is available at Srutilaya and Karnatic Music Book Centre, Chennai.

The writer specializes in Carnatic music.

Hey Pandas, which song artist do you think is overrated? (Firm)