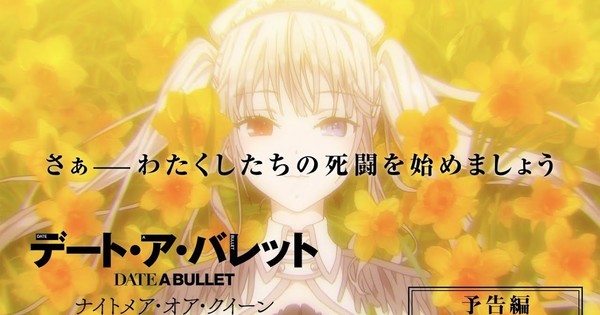 The official website for the two-part theatrical anime adaptation of Yuichiro Higashide‘s Live appointment Fragment: Date A Chip spin-off novels began airing a trailer on Monday for Date A Bullet: Nightmare or Queen, the second part of the project.

The film will open in Japan for event screenings on November 13. Date A Chip: Death or Bullet, the first film, released in Japan on August 14.

The cast of the theatrical anime includes:

Jun Nakagawa (episode director for Fatal bites, Saki episode from side A) directs the anime to Geek Toys (Looter, REDUCED). Author of novel Higashide (School-Live!, Destiny / Apocrypha) writes the script, and Naoto Nakamura (High school fleet) designs the characters. NO CO is credited with the original character designs.
Come on Sakabe (Live appointment, Digimon Adventure sorting.) composes the instrumental song “Infermata” as the opening theme of the project. Luiza performed the ending theme song “Only wish” for Date A Chip: Death or Bullet.

Kadokawa published first Live appointment Fragment: Date A Chip volume of the novel in March 2017, and Kadokawa shipped the sixth volume on March 19. The seventh volume ships on November 20. NO CO illustrates the novels.

The third season premiered in January 2019 and aired for 12 episodes. Crisp aired the series as it aired, and Funimation offered a simuldub.

A fourth season is in preparation.

Light novels have inspired many manga and video games. Compile the heart is developing a new game called Live appointment Ren Dystopia, which is scheduled for release on Playstation 4 this year after a delay.